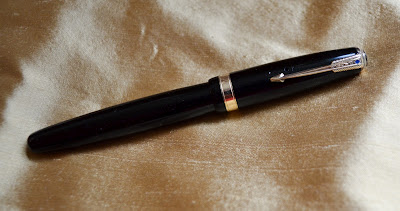 What it does, is write. Wow, does that pen write. It handles any ink I give it, just about any paper I give it, is reliable as anyone could ask for, and will withstand sticking in a pen case and not writing with it for a week without complaint.

I bought the pen probably 25 years ago, at an antique shop somewhere or other - I don't remember where, frankly. In my relative ignorance at the time, I didn't contemplate that it might not work, and so I loaded it up with whatever ink I had and it wrote beautifully. And it's worked happily and flawlessly for these last 25 years until a few weeks ago.

25 years' worth of service? Even Rolex recommends you have your Datejust serviced after five. I can hardly complain. 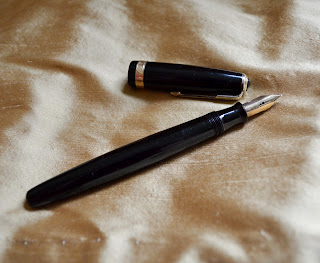 One day a few weeks ago, my little Vac wouldn't suck up ink. So, I packed it up and sent it off to Danny Fudge to rebuild, and asked for a light polish.

One day at work, my cell phone rang. It was a number in Nebraska. I don't know anyone in Nebraska, I thought. I reluctantly answered it, whereupon a man politely asked for me by name - "Ms. M...." Immediately suspicious, I asked in a rather rude tone, "Who's calling?" I was anticipating an offer to refinance my mortgage or consolidate my credit card debt - instead, it was Danny, wanting to know whether I wanted him to polish out some of the tooth marks, or if they held sentimental value for me. Something I would never have thought of, but he said he's run into people who don't want Dad's or Grandpa's tooth marks polished out.

I told him have at it, and it came back in working order, with the worst of the tooth marks gone (I did say "chewer" and not "nibbler" above, didn't I?). And a bill that was quite affordable too, I might add. 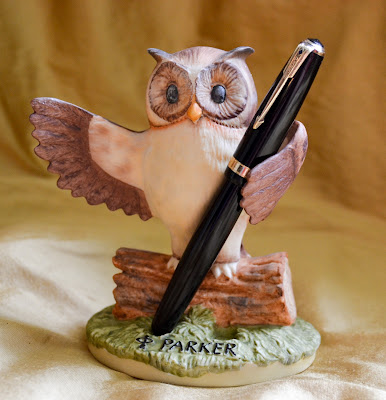 Here he is, in all his modest glory. The pen stand is a repro of a vintage Parker stand, a store display given to Parker dealers in the early 1990s. I won this marvelously kitschy stand from Fahrney's a month or two ago, and they asked for a photo of it with my favorite Parker, which was the seed sown that resulted in this post.

This unassuming little pen occupies a special place in my heart. Do you have a soft spot for a particular pen? 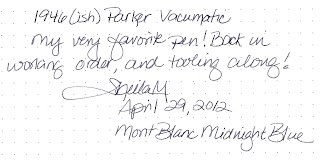