It occurs to me I've been remiss in not introducing you to the third member of the household. And, depending on one's viewpoint, he may well be the most important member. (Just ask him.) 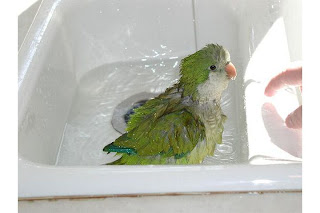 This is Gandalf. He is a quaker parrot, and came to us as a rescue in 2003. This photo was taken shortly after he came to live with us; as you can see, he is fond of bathing in the sink.

The story of his arrival is a bit fun. Well, the first part isn't - I had a lovebird for 14 years, who died of liver cancer in late 2002. After a month or two, we got in touch with a woman locally who takes in and rehomes birds that people don't want or can't keep, and offered to give her my bird's cage and some other supplies we had, since we no longer had a use for them; we figured she could give the cage to someone else that couldn't afford one.

She said she'd be delighted to take whatever we could give her, so we gathered up some things and went over to her place.

Read more »
Posted by SheilaM at 7:43 AM No comments: Links to this post

There have been a lot of reviews of the TWSBI Diamond 530 since it was released in early 2010. The pen was the result of collaboration with, and feedback from, the fountain pen community with the Taiwan-based designer and manufacturer, known on most pen boards as "Speedy." I won't go too far into reviewing the pen itself, since others have done a marvelous job of that already; examples can be found here and here.

﻿﻿This is about the nib. And here's the story.

Read more »
Posted by SheilaM at 6:00 PM 6 comments: Links to this post

Sometimes It's the Little Things

I'm sure all of us are aware of the upheaval the world seems to be in at the moment. In light of all the serious things going on, how can I maintain a simple little blog like this?

I am certainly not unmindful of the many troubles out there; I see this blog as a little bit of peacefulness. I just want to bring a little enjoyment and beauty to others.

And, speaking of enjoyment and beauty, Joe and I just got back from a few days away, and I thought I'd share a few pretty pictures with you. Hope you enjoy them! These were taken over the last few days in Langley, WA.

Here is a link to an album with the individual photos.


Posted by SheilaM at 6:00 AM No comments: Links to this post

Joe is a true fountain pen fanatic. In fact, when we recently were signing some legal documents, I was very proud of the fact that he actually didn't make a fuss when he was asked to sign with something other than a fountain pen. Usually such occasions elicit protest from him. (Of course, he was somewhat pacified when I loaned him my Retro 51 Cioppino rollerball.)

Yes, I know there are bulletproof inks. The truth is, sometimes it's just simpler to go along with the attorney/escrow closer/whomever than to fight that battle.

I also work in a busy office with a lot of different people, most of whom don't know what do to with a fountain pen when presented with one. The reactions generally fall into two different camps: either they're afraid of it, almost to the point of not wishing to touch it, or they get aggressive about it: yank on the cap, press hard while writing.

In either case, offering a fountain pen to a coworker doesn't end well.

﻿ ﻿ For these reasons, I've got a few non-fountain pens in the collection. As you might tell from the mention above, most of them tend to be Retro 51s. I find them to be of durable construction, well-balanced, comfortable to write with, and much less intimidating to the general public. People still tend to be careful with them because they're "nice pens;" I haven't had to go chasing after anyone trying to walk off with one, and yet they know how to use them.

For work, my strategy is to keep the fountain pens near me, and out of easy reach of visitors to my office. I keep a Retro or two front and center for others to use - as well as for me in those situations where a fountain pen wouldn't really work well.

I am of course always happy to delve into the joys and mysteries of fountain pens, should anyone ask; those inquiries seem to be few and far between within the general populace, however.

I'd love to hear in what ways others have expanded beyond fountain pens in their daily lives too!

Posted by SheilaM at 3:07 PM No comments: Links to this post