Boy, that Easter Bunny is one smart rabbit.

In most households in the US, the Easter Bunny brings eggs, or sweets disguised as eggs (plastic eggs filled with treats).

Not for me. Not in this household.

What did that bunny bring? Why, a clip for a pen, of course! 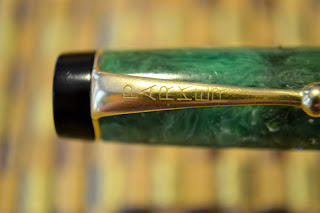 The Easter Bunny knows me well. He knows, for instance, that I've been trying to find a clip to fit this little Duofold for years. And so he's been looking.

Granted, it's a reproduction clip. I'm not worried about that. I'm glad to have a clip on the pen. And, honestly, it looks like a completely different pen to me now! 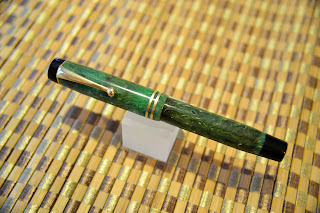 Happy Easter. Happy Passover. Happy Sunday!
Posted by SheilaM at 11:45 AM No comments: Links to this post

It's funny how people assume you're an expert in something because you have an interest in it.

I have never successfully repaired a fountain pen. My one attempt, many years ago, involved a vintage jade green Duofold which needed a new ink sac. I succeeded in getting the pen apart, put the new sac on with clear nail polish (don't do this, I beg you), and then couldn't get the section all the way back in the barrel no matter what I tried. I didn't want to force it too much due to its age and fragility. I finally sent it off to someone who knows what they're doing, who kindly did not mention my pathetic and ignorant attempts to "restore" the pen, undid what I had done, and sent it back in working order.

Now that I've confessed this travesty, it makes the next statement all the more ludicrous by contrast.

People at my office have begun referring to me as The Pen Whisperer.

The assumption seems to be that, because I like fountain pens, I can solve whatever woes someone may have with any given pen. Regardless of writing mechanism.

In an odd way, I have contributed to this myth.

My first contribution to it involved some old fountain pens that a coworker's mother had dug out of her desk at home. My coworker brought them in and asked me what I could tell him about them. Well, one had been an early Duofold; it was missing the blind cap and part of the pen cap and clip, and had been extensively chomped on to the point that we joked he'd used it when teething. Nothing to be done there. The next was a Sheaffer Skipper that appeared to be in working order but I didn't want to try inking someone else's pen as an experiment - those touchdown filling systems are complex and I couldn't be sure it would work.

The third was a 1980s Cross. The only thing wrong with the pen was that it had been put away with ink in it. I happen to have an ultrasonic jewelry cleaner, so I took the pen home and ran the nib and section through probably 15 cycles, then flushed it extensively with an ear syringe, using the classic water/Windex/dish soap mix and then clear water. I flushed out the cartridge that had dried ink in it, filled it with my standard test ink of Waterman Florida Blue, and wrote Pat's mom a nice note with the pen so she could see how it wrote.

I then took it back to work and gave it to him (having flushed it clean again). To my horror, he offered me money for the "repair." Which I did not accept; I don't take money from friends for favors, and in my mind I didn't really repair anything. But the story went around the office that I'd "restored" his mother's pen.

Then, a few days ago, someone I was in a meeting with was having trouble with a retractable ballpoint; another attendee said, "give it to the Pen Whisperer!" and I was handed the pen with an expectant look.

Well, the thing simply wasn't screwed tight together, and one or two bits had worked their way out of alignment. A little fiddling, a little tightening; click-click! "There you go, all better now."

Heaven help me if someone ever hands me a pen seriously in need of repair; my cover will be completely blown. In the meanwhile, however, I am enjoying the Pen Whisperer rep, however undeserved.
Posted by SheilaM at 11:20 AM No comments: Links to this post 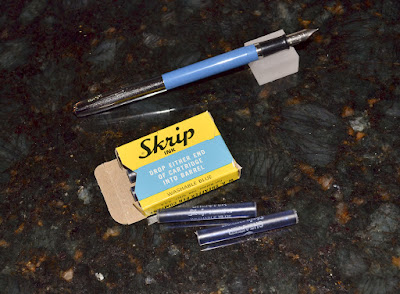 (Note all photos are clickable)
I don’t know that these pens ever had an official name from Sheaffer. There were several generations of similar pens from Sheaffer, from the 1960s into the 1990s. They don’t currently make anything that’s quite the same. I think that’s a shame.

From the packaging, I’d say this was made in the mid-1960s. My reasoning is thus: The Sheaffer address on the pen packaging does not have a ZIP code on it. The packaging for the ink cartridges does, but the state name is spelled out in its entirety. ZIP codes were introduced in the US in 1963, and became mandatory for certain mailings by 1968; the use of the two-letter state code came into vogue at about the same time. So, it appears this pen was made – or at least packaged – during that transition time.

I had several of these in high school in the 1970s and the design was identical, so these were made for many years. They overlapped the No Nonsense line during the 1970s, and then were largely replaced by them. 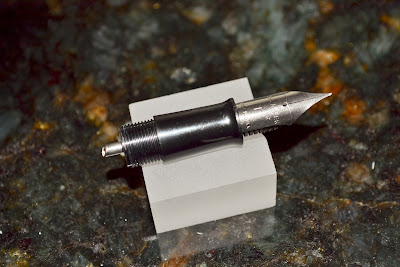 These pens consist of a plastic barrel, a steel nib, and a metal cap. They are cartridge-only pens, and take a proprietary Sheaffer cartridge which is basically a closed tube of ink which is pierced by a sharp metal fitting on the end of the nib section. This cartridge design is still available. It was a bit shocking to see the 49 cent price tag on the box, and realize that now a 5-pack of these cartridges sells for $5 – 7. Just a bit of inflation, eh? 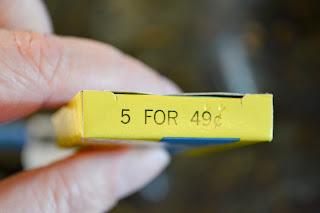 The “unbox” of this pen, if you could call it that, was kind of interesting. In its plastic bubble package it was much more accessible than things in bubble packaging these days. No risk of slicing one's fingers off here.

You can see that the ink cartridges have largely evaporated over the years. I ended up flushing one out and refilling it with Sheaffer Red ink for initial testing. 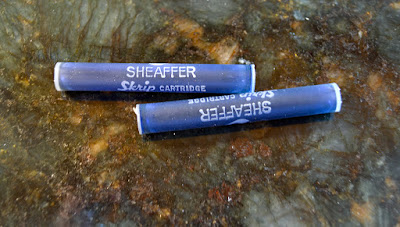 The first few sentences were pretty scratchy, and this is definitely a fine nib, unlike most modern US "fines" which are somewhat of a thin medium to me. The more I use the pen, though, the more it's breaking in. And for a pen that's probably 45 years old, albeit unused, I can't complain about its performance. Started right up, keeps on going, doesn't dry up between uses. I don't think I can ask for much more.

So, if you're looking for an inexpensive pen, consider picking up one of these. They were easily found in their day, which means there are a lot of them left out there. eBay is a good source. The one downside, as noted above, is that they are cartridge-only, but if you are at all adept in refilling cartridges (and it's not that hard - consider Private Reserve's cartridge refill syringe for the job - link here is to Goulet Pens, but it's readily available) you can use whatever ink you wish, as I did.


I had fun with the nostalgia aspect (for me) of this pen. And I think I'm going to have fun using it too! 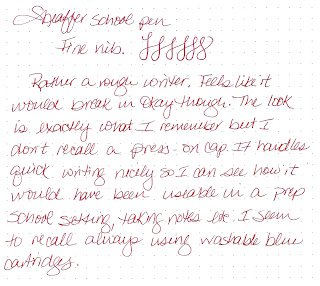 Posted by SheilaM at 8:21 AM 3 comments: Links to this post