This sure takes me back. I am in grave danger of saying something like, "Yes, those were the days..."

I had a pen just exactly like this in high school. That was more than few years ago now.

(as always, all images are clickable)
I thought myself the ultimate in fashionable as a sophomore with this fountain pen - a translucent one, mind you, and in red. See-through! Look! You can see the cartridge! How cool is that?

A few weeks ago, I posted about another style of Sheaffer school pen. That plastic-bodied, metal-capped model was succeeded by the No Nonsense pens, which were wildly popular for years both as fountain pens and as ballpoints and felt tips. I had several of them. Because they were so popular, there are still a lot of them around, and they're fairly easily obtainable. I picked this one up for a very reasonable price. 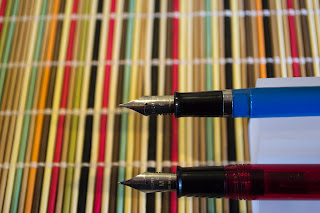 The nibs of both the "school pen" and the No Nonsense echo past Sheaffer style
At the same time, I got what's a fair rarity. In fact, until the last couple of years I never knew they existed. They're practically made of unobtainium now - or are at least relatively priced as if they are, often costing more than the pens. That is (drumroll, please...)
The converter. 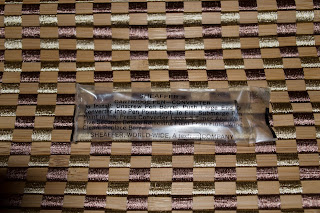 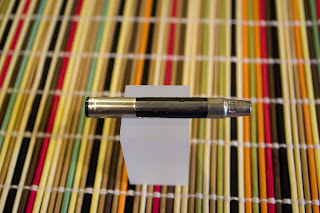 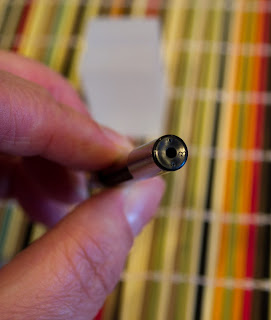 The converter consists of a relatively small rubber sac inside a metal tube, with a squeeze bar. As you can see, one end is perfed to take the metal feed end of the nib.
Of course, the first thing I did for these shots is throw a cartridge in the pen; I'll have to wait to play with the converter later. ﻿I'll report back if I get a chance.
The No Nonsense also featured front and center in a number of calligraphy sets marketed by Sheaffer; one of the most common sets consisted of a pen body (usually black) and three Italic nibs, F-M-B, along with a small handbook, some practice paper, and several cartridges of differing ink colors (black, blue, red and green as I recall). Although I have one of these around the house, I really wanted a pen that was just like my high school one, down to the nib.
No Nonsense pens are all over the Bay and various seller sites. I do recommend them if you are looking for a basic, reliable pen. Note they take Sheaffer's proprietary cartridges, still available; workarounds for "use your own ink" include the converter if you can find one, as well as flushing out a cartridge and refilling with the ink of your choice.
Interestingly enough, I recall a much broader line than this pen actually delivers, although I'm certain what I had was an M nib. The pen is quickly responsive; the nib is pretty much a nail, and a tad bit scratchy (keeping in mind it's new old stock and not worn in at all). The line is quite uniform. This would have been an excellent pen for note-taking, and that's exactly what I used it for.
All in all, a good, reliable basic user's pen.
Did I mention it's translucent? And red? That is so cool...
Here's a quick comparison shot of writing with the No Nonsense M and the school pen F.