There are a few modern American penmakers of the boutique variety - smaller operations whose focus is on catering to the specialized desires of the fountain pen community. Two that come to mind are Bexley and Edison.

Frankly, I've been a little leery of purchasing from these penmakers. This is despite numerous positive comments from others on the products. I don't mean to be disrespectful of either Bexley or Edison, but somehow I had  in my head some sort of kit pen finished nicely - which can be found at almost any crafts fair these days, at least where I live, and often for a fair amount less money.

Then I saw a tweet from Richard Binder that they were taking orders for the Bexley Jitterbug! (Though, as you'll see, I am enthusiastic about the pen, let me point out here that the exclamation point is part of the product name.) I was intrigued with the idea of a modern pen with a vintage NOS clip - and a very retro looking clip, at that. I thought for less than a minute before buying one, in Boogie Woogie Black Mosaic. I kid you not. (Look out - it's that "ooooh, shiiiiny!" thing happening again.) 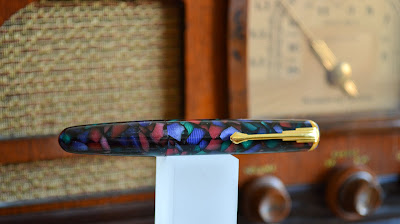 (As always, all photos are clickable)
And what an interesting and fun little pen it is.

If one happens to see the capped pen lying on the table with the clip facing away and out of view, it looks like nothing so much as a barrel without the section in it. Hmm, where's the rest of the pen? Then the gold trim of the clip band attracts the eye - what's that? Turn the pen a bit, and one can see a nice little matching jewel on the end. Okay, now, what is going on?

I'll tell you: a smart little pen design is going on.

Capped, the Jitterbug! is shorter than a Kaweco Sport. Posted, it's actually longer. The pen has a full-size two-tone (retro-looking!) nib with the Bexley logo and name. My pen is a fine nib, and writes like a true fine, thin and precise. There is no real flex to the nib - which I frankly didn't expect, anyway. 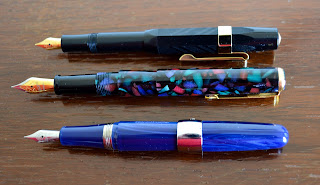 Given the extreme shortness of the barrel (2 3/16 inches or 5.6 cm), the cap doesn't post very far down (and how could it? the barrel would be so easily engulfed!). I have not had any issues with the cap staying posted, though I've heard from another Jitterbug! owner that she was having trouble with it; fair warning. And this is a pen you'll need to post; unposted, it's just too short to write with easily.

The pen barrel is too short to hold any kind of converter I'm aware of, but will accommodate a short international cartridge. It also has a small O-ring so one can use it as an eyedropper - and that's what I opted for, albeit a bit nervously. I added a little bit of silicone grease on the threads just in case, a belt-and-suspenders approach more to assuage my own nervousness than out of any probable need. The Jitterbug! is joining a handful of rather fine-nibbed pens that I use particularly at work, since the company-supplied printer paper and notebooks are - um, rather absorbent. For this reason, leakage would be more of a crisis than it would be for a stay-at-home pen. I think I'd be hard-pressed to explain a puddle of ink on my desk at work. 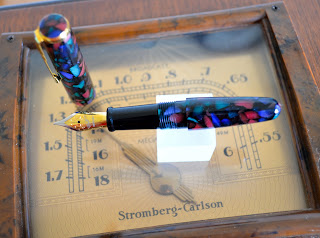 I'll be honest - I bought the pen on impulse, and then went back and looked carefully at photos of the pen posted - which caused me some concern; the "stepped" design of the pen as posted looked like it might be awkward or uncomfortable to write with. I am happy to report that, at least for me, the "steps" fall outside of touch points on the pen when I hold it to write.

And I can't speak for all of the colors, but the pen I bought shows a translucency to the material that I find very fun. The mosaic is very retro-looking to me and a good match for the 30's Deco-style clip.


﻿
The pen comes in a metal box lined with foam, with cutouts available to suit an apparent variety of pens - I'm guessing it's the standard Bexley box, fitted to use with all of their products. Interestingly enough, it came with a return label - in case I didn't like it?

And, it came with one more thing: 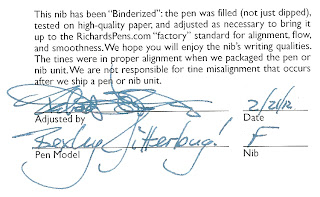 I expected to find a decent pen when I opened the box. What I found is an ingenious little pen that writes like a champ. Overall I am very pleased, and can recommend this pen thoroughly.

1930's Stromberg-Carlson tube radio courtesy of Joe in Seattle. Actually, I swiped it out of the bedroom to use as a backdrop when he wasn't looking. And it even works!

And by the way, the same weekend I also pulled the trigger on an Edison...just more reason to eat my words. But that's a story for another time; stay tuned! 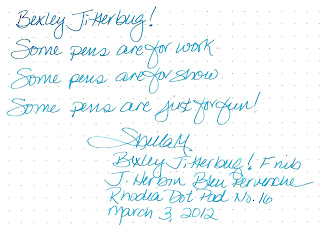