I have long been intrigued with the idea of a refillable rollerball - a truly refillable one, capable of using fountain pen ink in its myriad of colors and makers, and not a rollerball insert confined to a manufacturer's idea of what colors might be appropriate or popular. 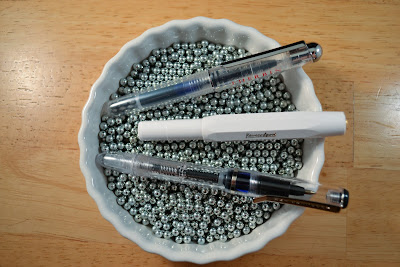 With that in mind, over time I have purchased three of the more budget-friendly models: the Kaweco Sport rollerball, Noodlers rollerball, and the J. Herbin rollerball. Each has its advantages and its drawbacks. 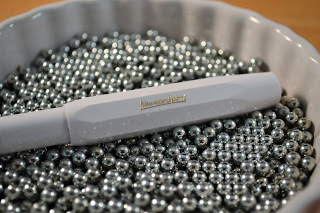 First, let's talk about the Kaweco Sport. I have a Kaweco Sport fountain pen as well, and I am rather fond of it; they seem to be sturdy little pens, designed to knock about in a purse or pocket with little fuss. The fountain pen writes uncomplainingly and consistently. My Kaweco FP is black, and of course I wanted the rollerball in white; the sections of the two are interchangeable, though it might look a little odd with the color difference, so I can swap the sections back and forth and have a black (well, mostly) rollerball, for example. The body and cap of the pen, thus, are just like the Kaweco Sport FP - plastic, faceted, with a screw-on cap. 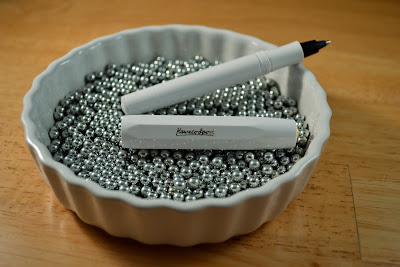 Kawecos are famous (infamous?) for not being able to hold a converter; there are some people who have made the Monteverde short converter work, and others who have failed miserably at this. I've seen one or two jury-rigged converter examples out there as well, but given my past experiences at ink going places where I don't want it, I'm leery of slicing and dicing my way to a converter. The options, then, are to use short international cartridges (either prefilled or fill-your-own) or convert the pen to an eyedropper. I have not tried converting the rollerball to an eyedropper, but I can't see how it would function any differently than a FP conversion would. 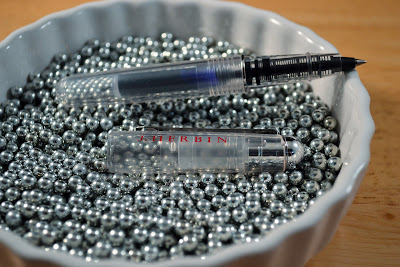 The J. Herbin pen was a nice surprise. The pen, while a bit longer than the Kaweco, is still fairly small, and holds a short international cartridge. This pen comes only in clear plastic. There are breather holes at the barrel end, which makes this pen not a contender for eyedropper use without modification to block the holes - which might be difficult to do inconspicuously. The cap is a snap fit, secure but not so tight you have to yank. The clip is folded metal. Unposted, it's a bit short for me to write with, but for the price I don't mind posting; this isn't a pen I worry about marring by posting given its modest price! 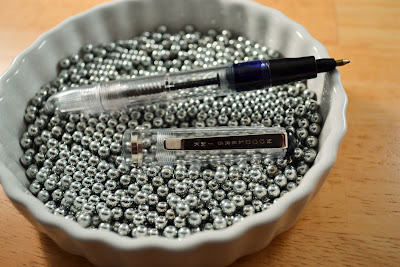 The Noodler's pen, in concept, is a great idea. This is the only piston pen at this price level, giving it good ink capacity. The nibs swap out if wear should become a problem. It, too, comes in clear plastic. My experience with this pen echoes the challenges I had with the Nib Creapers offered by Noodler's: idea is good, execution is poor. I think there was so much effort put into keeping the cost down on these pens that even moderately acceptable quality was sacrificed. To be honest, later models of Noodler's pens may be better, but I am so disenchanted with the initial offerings I'm not inclined to gamble further on their pens.

The ink delivery on the Noodler's is not as reliable as the other two, and the feel of writing with it is unpleasant; it feels like I'm writing with a rusty pin. It also makes a grinding squeak while in use, and has from the day I got it. I have also heard that the plastic on these is not very durable, subject to shattering if dropped; while the pen itself is not so expensive that I'd cry if it broke, again, I've unwittingly colored enough of my possessions with FP ink without adding more to the mix.

Both the Kaweco and the Herbin rollerball deliver a consistent line that is somewhat wider than I've gotten from, for example, the Monteverde rollerball inserts I use in the Retro 51 rollerballs I own. The nib feel is quite unlike the rollerballs we are all used to writing with; more "road noise" and paper feedback. If this is an issue for you, you may not enjoy the experience.

A rollerball pen using fountain pen ink is an idea that keeps cropping up, and several manufacturers have given it a go - some of them at much higher price points than any of these pens - but none of them seem to have quite gotten it right yet. Part of the challenge lies in formulation, and part in mechanics. My Retro 51s, using Monteverde gel ink inserts, write a finer line more smoothly with nearly instant drying; they have the advantage that when the insert runs out of ink, the entire rollerball mechanism is replaced along with the ink supply, so there are no challenges trying to deal with wear on the rollerball. 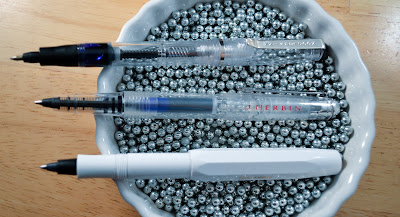 The Noodler's was the first I bought; after my unhappiness with the pen, I gave up on the idea for some time, and I've acquired the Kaweco and Herbin pens only within the last month or so. I would recommend either the Kaweco or the Herbin as an alternative pen to be able to use your ink of choice in situations where a fountain pen may not work (at my job, for example, I still deal with one or two forms that are carbonless copies requiring some pressure).


Or maybe just for fun as something different! 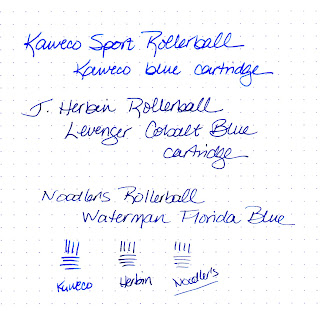