There have been a lot of reviews of the TWSBI Diamond 530 since it was released in early 2010. The pen was the result of collaboration with, and feedback from, the fountain pen community with the Taiwan-based designer and manufacturer, known on most pen boards as "Speedy." I won't go too far into reviewing the pen itself, since others have done a marvelous job of that already; examples can be found here and here.

﻿﻿This is about the nib. And here's the story.

One of the (several) benefits of the TWSBI is that the nibs are interchangeable. TWSBI offers nib units for sale in their eBay store. Recently, I bought a B nib, and then shipped it off to Pendleton Brown to regrind it.

Pendleton has a nib grind that he calls a butter-line stub. I have a pen with a nib that he had reground to a true cursive Italic, and while I like the look of the line it writes, it was "catchy" when writing with it and a bit finicky for me. (Nothing to do with Pendleton's work, and everything to do with the way I write.) For the TWSBI, I opted to go with the butter-line stub. 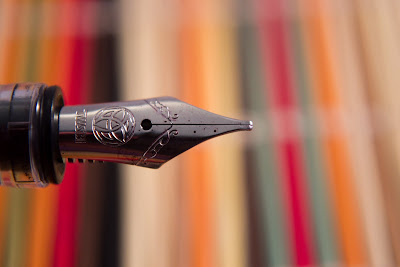 This is an interesting nib. It doesn't seem like it's quite a true stub, and it's certainly not a true CI grind. It's a bit of a hybrid. Cursive Italic nibs are rather sharp, and the edges are "pointy" which can result in it feeling like it's catching on the paper, as I mentioned above. They can also be fussy about angle, and not work well unless the pen is held in a specific angle to the paper. Stubs are smooth by comparison, with rounded edges, and don't offer as much line variation between vertical and horizontal strokes as a CI does.

The results with this nib are fantastic.

The pen writes like a dream. The TWSBI is well-tuned for ink flow, and the butter-line stub delivers that ink beautifully. The nib is smooth but not glassy; you can feel what you're doing when writing with it. The line variation isn't quite as dramatic as with a true CI but it's very close - closer than I would expect with a regular stub nib. And I happen to think my handwriting is well-suited to this type of nib. The balance of easy-to-use writing and good-looking result is very nicely done.

So nicely done, in fact, that Joe keeps stealing the pen when I'm not looking. I told Pendleton I'd been offered a box of chocolates and a Pelikan in exchange, but I wasn't going for it. I like the way the nib writes too well to give it up. (And Joe knows I don't prefer Pelikans...)

The Diamond 530 has recently been replaced with the Diamond 540; the nib units are identical for both pens. Looks like you can pick up a B nib from the TWSBI eBay store for $20 plus shipping, as of this writing; contact Pendleton Brown directly for cost of regrind. 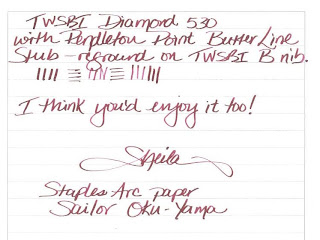 ﻿No affiliation, other than a happy customer...
Posted by SheilaM at 6:00 PM