Today marks the US release of the latest Sherlock Holmes movie starring Robert Downey, Jr. (I mention this on the off chance that you are not a Robert Downey Jr. fan. If you are unfamiliar with his work, start with Chaplin. Amazing. I think you'll be a convert.)

I thought I'd spotlight the DeAtramentis Sherlock Holmes today in honor of the film release. Plus, it's a really fun ink. (Though advance reviews of the movie aren't quite as admiring, I'm sorry to see.)

Until fairly recently, DeAtramentis ink was a bit difficult to come by in the United States. It's made by Tintenmanufaktur JANSEN in Germany, and was in very limited distribution in the US. Rumor has it that it's a relatively small operation; their website is about half in English and half in German. I see that Goulet Pens has started to carry some of the line, and I'm grateful for that, as based on my experience with this ink I think I will definitely need more! I hope they will be able to get some of the more esoteric sets, for example, those categorized under "Magic Boarding School" on the DeAtramentis website.

Why Sherlock, in particular? Well, the truth is, I was after the Mark Twain ink to go with Volume I of his autobiography last year as a gift for Christmas - only apparently everyone else had that bright idea a week or two before I did, because I couldn't get my hands on a bottle of the Mark Twain. Sherlock, alas, was a second choice. But it turned out to be a good one - see below. 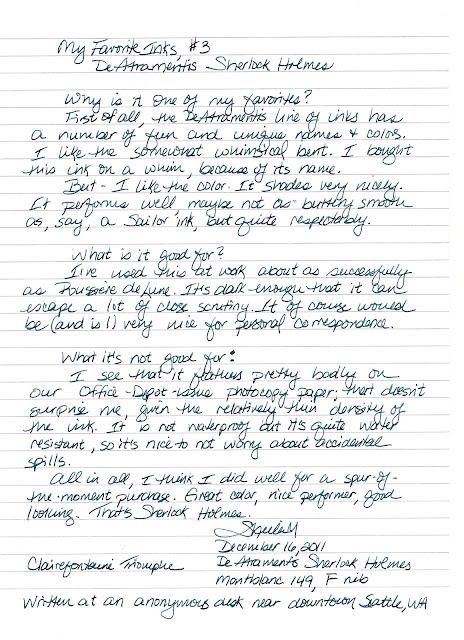