Found in the Wild

Went out for ice cream, and came home with a pen

There's a great little ice creamery about 15 minutes away from our home. It being a sunny Sunday afternoon, we decided to run out to Snoqualmie Ice Cream and grab a dish of ice cream as a treat.

Snoqualmie Ice Cream is in a fairly rural area, at a crossroads known as Maltby. Just down the street, tucked behind some other buildings, is an old antique shop we've never managed to get to before - it's not open all that often.

Well, it was open today, so in we went. And just inside the door, in one of the cases, was almost an entire shelf full of fountain pens.

Nothing terribly fancy, but a pretty wide assortment - three or four Esterbrooks, a couple of Sheaffers, two or three Eversharps -  you get the idea. I got pretty excited when I saw a Parker True Blue junior for $15, but it was in pretty bad shape and had a Sheaffer student nib in it, so I passed.

I did come home with this - a Carter. Obviously used, with the de rigeur dried blue ink in it, it has a 14k nib and is in good shape with only minimal brassing. The barrel suffers a bit from the discoloring so common in certain colors of that time (about 1930). It was marked at $20, but it came home for $18 plus tax. (I paid cash, and had chatted up the owner about how it was going to a good home, I'd have it resacked and use it; I think it influenced his pricing.)

I don't think it's a sumgai find by any means, but it's a great memento of a lovely Sunday afternoon. 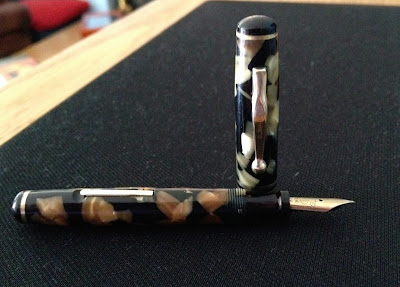