A Kodak Moment: Whose Memories are These?

Joe and I recently took a day trip  to a local town. We did the tourist thing - walk through the shops, stop for coffee and pie at a local restaurant, go digging through the antique stores.

In one of the stores, I came across a basket of old 35mm film canisters.

﻿
(as always, all photos are clickable)
I think I've mentioned before that at one time I did a fair amount of film photography. My grandmother was president of the local camera club, and bought me my first SLR at age nine. I did nearly all of the sports and "color" photography for my high school paper and yearbook during my last year of high school. I had thought of being a professional photographer, but a year of lugging two big, heavy Canon SLR cameras around with me everywhere cured me of that desire.

And then I got through college, went out into the working world, and put the cameras away pretty much completely. It's only with starting this blog that I've gotten back into it at all. Things have changed a lot since the last 35mm SLR I got, whose claim to fame was a built-in light meter! In some ways I'm having to learn all over again due to the many advancements that have been made.

The film canisters brought back memories for me; they were older than most of what I'd worked with, but still similar enough for nostalgia. I picked one up, and was surprised to see it had a roll of negatives in it. 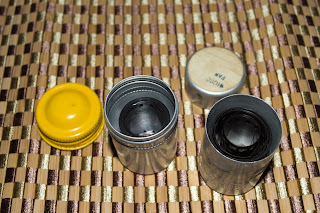 Whose memories did I hold in my hand?

I unrolled the negatives, and saw photos of people, a fishing trip, horses. The film was Kodak Panatomic-X, black and white. What I saw looked fairly old, though looking at 35mm negatives makes it hard to tell.

Yesterday, I spent some time with our flatbed scanner, an old professional-grade model that handles negatives nicely.

The first image that came up was a group of people wearing clothes that are quite old in style. I am no expert, but they look to be late 1940's styles to me. Somehow I suspect this is a graduation photo. 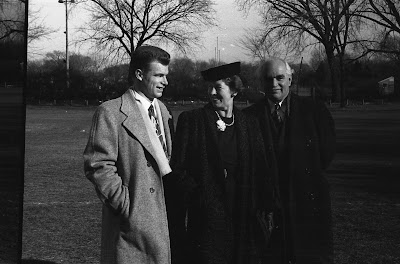 Joe noticed a photo of what looked like beech trees. They're not common in the wild around here. 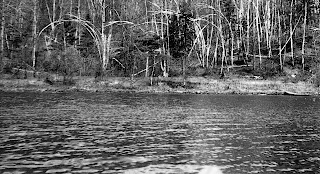 Who are these people?

The next round of scans included a movie camera, and a photo of three young men in college sweatshirts. Grinnell College. That's in Iowa. 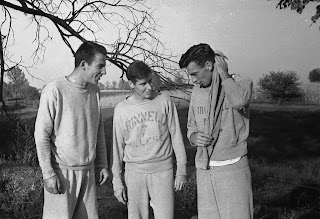 Iowa? Really? How on earth did these negatives make their way to an old fishing-turned-tourist-trap town in Washington?

Here are links to the scanned photos, in case you're curious.

All of the undeveloped film I saw as I went through the basket was also Panatomic-X. I suspect everything that was in the basket (10 - 15 canisters, some of which were empty) belonged to the same individual.

A quick Google search revealed Panatomic-X film referenced in Popular Mechanics, November 1933, as a "recently released" film. The movie camera in Roll 2 appears to be a Paillard Bolex H-16 Leader, which was manufactured between 1946 and 1958. That's consistent with the hair and clothing styles in the pictures.

It would be marvelous if I could identify the people in the photos, and perhaps reunite old family photos with their proper owners. I doubt, though, that I can do that short of pure chance. I may contact Grinnell College to see what  they can tell me.

I'm glad to keep someone's memories alive in this fashion, at least.
Posted by SheilaM at 6:00 AM