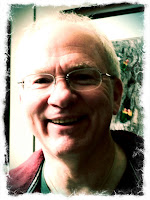 Ed. note: I'm pleased to offer the following review from guest blogger Joe in Seattle. (Though I wonder if it counts as a "guest" blogger if he lives in the same household...?) Here is his take on this classic journal. Enjoy!

Many years ago Levenger was among the very first to offer a leather cover refillable with either journal or calendar inserts. This was their original Stanley cover, and was offered in desk size and pocket-sized versions. I bought, or was given, a desk size in British tan with my initials embossed in the corner of the front cover. 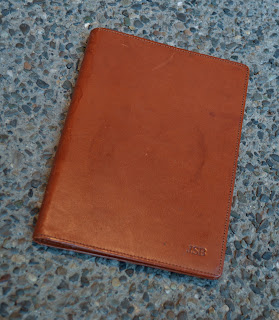 As usual, all photos are clickable
When I noticed that Levenger was discontinuing these inserts (again, quite a few years back) I stocked up on a dozen or more because I liked the size of the journal and appreciated how it lay flat to write in, but not because I was enamoured of the qualities of the paper.

Over time I’ve acquired an Inkleaf cover for Rhodia Webnotebooks, and a Renaissance Art Cover for Moleskines, but the Stanley journal remained in limited service for an occasional scripture study with my dwindling supply of the original inserts.

This past year when Levenger began restocking the journal and calendar inserts in the Stanley size I wondered how they compared to the original paper and even posted on FPN asking if anyone had experienced them. As time passed without a review of this new/old product I decided to invest $22 of my very own for a pair of the inserts to do the research for the overall good of the fountain pen community.

Here are my findings:

Both old and new versions are paperbound with sewn signatures that allow the notebook to lay open quite flat for ease of writing. Both have gilt edges, paper covers, and measure 5.5 x 7.75”

The new version is changed to include page numbers at bottom centre of each page and the annotation “A journal belonging to:” on the first sheet along with spaces for to and from dates. It also has a more handsome dark blue paper cover which could be used sans leather cover without embarrassment. The new version, at the same price as the previous offering, if I recall correctly, has 118 ruled pages vs. the previously supplied 158. The sleeve which surrounds the two packaged as one journal is noted as “made in China.” I don’t recall where the older versions were produced, they are not marked. 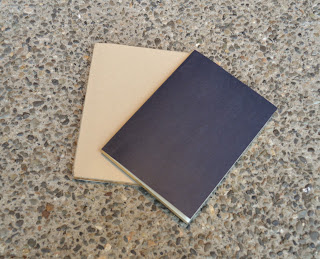 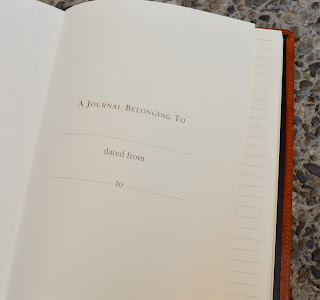 Both are ruled in what I used to know as “college ruled” and both are an off –white, though the current version is a very slightly more creamy yellow and the ruling is slightly larger. I actually like the larger ruling scheme better than the earlier rendition. It’s surprising what difference a very small change can make. The Levenger website identifies the paper as 100 gram.

In my experience the earlier inserts were quite subject to bleed-through with even a modestly wet nib. They nearly doubled the apparent nib width of any pen I used. I was limited to vintage F and EF nibs when writing in it. That is why I experimented with the Rhodia, Moleskine, and Leuchtturm 1917 alternatives as they became available over time. My present all-time favourite is the 1917 notebook with dots rather than lines.

I’m pleased to conclude that the new paper exceeds the function of the original in every way. It feels smoother to the hand, takes the ink from the nib with less friction, and most importantly, does not bleed through even with a very wet nib. 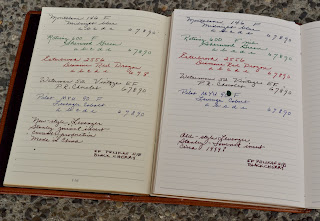 Levenger’s site describes the leather journal covers they currently offer as “back by popular demand” though they are now a pebbled finish available only in Henry Ford’s favourite colour: black. The current price is awfully near what it was years ago.

I’ll be returning my Levenger Stanley British Tan Desk Journal to regular use with these new inserts. The journal itself shows 15 years of wear, ink stains, tea stains, and water spots, but it’s like having an old friend return after a long absence. I’ll be buying more of these inserts.
Posted by SheilaM at 3:17 PM