(title with apologies to Steve Martin)

The Jinhao arrived the other day! I must say, for a rather inexpensive pen, it's a solid one. The finish was described as "sand" but it's really tiny holographic glitter on a black background - pretty flashy, though it may not be to everyone's taste.

The nib is steel and quite firm; it was described as medium, but it's a rather fine medium, not nearly as broad as an American M. I like the line it writes. In fact, I like the pen, and would be happy to have it - which means it's giveaway time!

Here's a brief video I shot (first time doing this, please have mercy on the videographer...not to mention: a hand model I am not!) going over the pen. 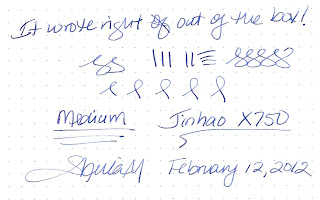 And now for the giveaway:

If you're interested in entering the random drawing for the pen, please complete the form below. Entries will be accepted until Saturday, February 18, 2012 at 12 midnight PST (GMT-8). At that time, I'll randomly select a winner and be in contact with that person.

(Joe in Seattle, you are NOT eligible for this...sorry dear!)