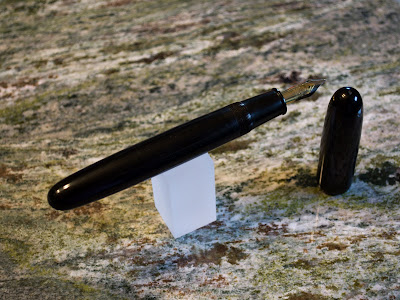 (as always, all photos are clickable)
I bought this pen in February. It's now the end of July, and I'm just getting around to writing this review. Why?

Well, yes, I am busy, but so is everyone else, and I've managed a few other posts here between February and now.

Truth? I was afraid of it. Really.

I had wanted an eyedropper pen for a while to play with when I bought it. For those unfamiliar, the eyedropper method of filling a fountain pen is simple: you fill the body of the pen with ink. No sac, no cartridge, no converter; you just dump ink in the barrel. The name comes from the usual method of inking - by using an eyedropper. It's one of the simplest - and earliest - filling methods.

Vintage eyedropper fillers are often quite old, approaching 100 years or so, and as such seemingly would be subject to the vagaries of age - warping, shrinkage, leaking...and I didn't want ink leaks. We've had a couple of near-disasters in this household as it is and I didn't want to contribute further to the ersatz coloring of our various possessions. One big green spot on our light maple kitchen table is more than enough. Not to mention the Baystate Blue on the dining room table or the orange in the cream colored carpeting. (Those two were Joe's contributions, though he denies the carpet one. I don't use orange ink much. He does. 'Nuff said.)

Guider Pens is an Indian manufacturer, in business since 1946. They state on their website that they're still using the same machinery they imported from Germany in the 1940s to make their pens. Guiders appear for sale occasionally on the Fountain Pen Network and other boards, and I believe one can also buy direct from them.

I know there are modern inexpensive plastic eyedroppers out there, but I liked the idea of one of the Indian pens, and had seen favorable comments from others on them. I had a chance to pick this up at a good price so I bought it. And then stuck it in the pen box and let it sit there for months.

Finally I steeled myself, pulled the Guider out of the pen box, and dumped an entire 2mL sample of Diamine Saddle Brown in it. (The pen will hold over 5mL of ink.) I put a tiny dab of silicone grease around the section threads, and screwed the section in. And turned it....and turned it...lots of very fine threads. A good sign; helps to minimize those ink leaks I'm so afraid of. Frankly, I'm not sure if the silicone grease was necessary, but I was taking no chances.

So here are my impressions:


﻿ ﻿
"Jumbo" is an understatement. This thing is a monster. It dwarfs my MB 149, longer by over an inch. It's also markedly thicker. For its size, it is well balanced, and comfortable to hold. It's made of ebonite so it's reasonably light, and I don't think it would be a problem to write with over time. The body was turned with a subtle taper to it, so it lays nicely in the hand. The nib is a JoWo, I'm pretty sure, with what looks to be a matching ebonite feed. It's quite large, to balance the pen.


﻿ ﻿
The cap will post, but makes for a pen about the length of a baseball bat - and I don't like posting my pens anyway. It also feels overbalanced with the cap posted; too much weight to the rear of the pen.

The big surprise is how nicely the pen writes. I'm not sure whether it's dumb luck, or what, but the nib is beautifully tuned and lays down a consistent line, about an eight in wetness, every time. It starts right up when I uncap it; no issues with drying out or balky performance. So far it's been very reliable. And no ink burps, which is what I'm most afraid of.


I'd say my biggest challenge will be not getting tired of the ink color well before it runs out. 5mL is a lot of ink!