I don’t have an unlimited budget for fountain pens. Most other people don’t either. And there are a lot of inexpensive fountain pens out there that are perfectly good. There are also a number of them that aren’t. I will be spending some time looking at some less expensive pens to explore a wider range of what's available out there. Here's my first attempt at that. 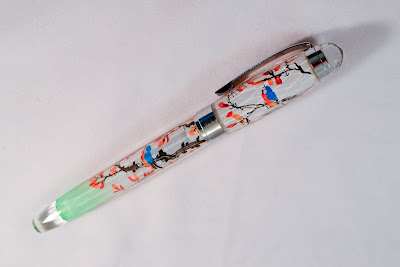 The other day, I bought a pen purely as a novelty, not really expecting the thing would be much good. I didn’t spend very much money for it. It’s made of glass, and allegedly reverse painted. I think it really is reverse painted; Joe and I spent some time looking for signs that it was a decal or paper insert of some sort and can’t find any indication that it isn’t reverse painted, though I expected to find it wasn’t. It has a nib labeled “GENIUS IRIDIUM GERMANY.”

Genius is (or was) a Chinese or Taiwanese brand; they apparently had legal issues with a Major Brand (the capitals are your hint) because some of their pen designs featured a white plum blossom on top of the dark-colored cap, somewhat resembling that Major Brand’s offerings – in that one respect at least. I don’t believe Genius is still in business. Much of what I read tells me that I should assume the word “GERMANY” is decorative, not an indicator of the nib’s origin.

I bought the pen because I’d not seen anything like it. When it first arrived, I was pleased to see it came with a halfway decent piston-style converter. I inked it up and….

I twisted the piston.

I twisted the piston some more. A blob of ink came out between the section and the nib. Still no ink to the nib.

Stuck the converter back on it.

Look! It writes! And actually not too badly!

The section is shiny metal, and rather tapered; this makes it difficult for me to hold. I am happier grasping it near where the section screws into the barrel. Which means that I’m not too happy writing with it, since that’s an awfully long way back to hold a pen.

Still, as one of my first forays into inexpensive and novelty pen territory, it’s better than I thought it would be. The nib is pretty much a nail, but it’s also pretty reliable. And I also happen to think it’s kind of pretty. 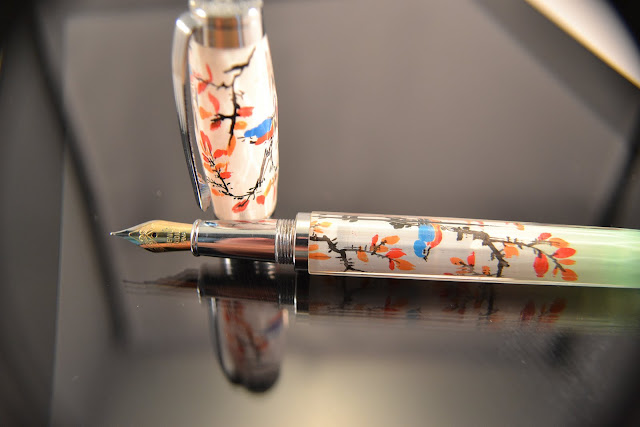