So what is a girl's pen, anyway?

Good friends of ours, Budd and Judy, joined us for dinner last night. We hadn't seen them since well before Christmas (he was in Egypt - a tale for a different time!), so we had a belated Christmas celebration last night as well. Part of our gift to Budd was a bottle of J. Herbin 1670, since he is also a fountain pen user.

I pulled out my pen case to grab a pen that happened to have 1670 in it, so he could see what the ink looked like. He asked to look at the pens, and of course I handed the case over - I have no worries about accidental damage or mishandling by Budd, since he knows his way around a fountain pen.

He looked them over for a few minutes, and then suddenly looked at me and said, "These are awfully big pens for a girl! These look like men's pens!"

This echoes a debate I've seen once or twice before on FPN, and it always puzzles me.

All kidding (and my husband's reassurances) aside, I haven't met anyone's definition of a "girl" since Duran Duran was the hot ticket. This means, among other things, that I have just a bit of arthritis in my hands - though, oddly enough, it's worse in my nondominant right hand. This is partially why I prefer bigger pens; they're easier for me to use.

But I also remember having a Sheaffer NoNonsense-like fountain pen in high school in the '70s and using it frequently. They called it something different then, I believe, but it was essentially the same thing. Those aren't exactly small, delicate, frilly things either.

So here's a shot of my pen case. (As usual, I have eight pens crammed into a six-pen case. Not recommended, of course, but I can't seem to help myself.)

What's your take? Girly? Not? 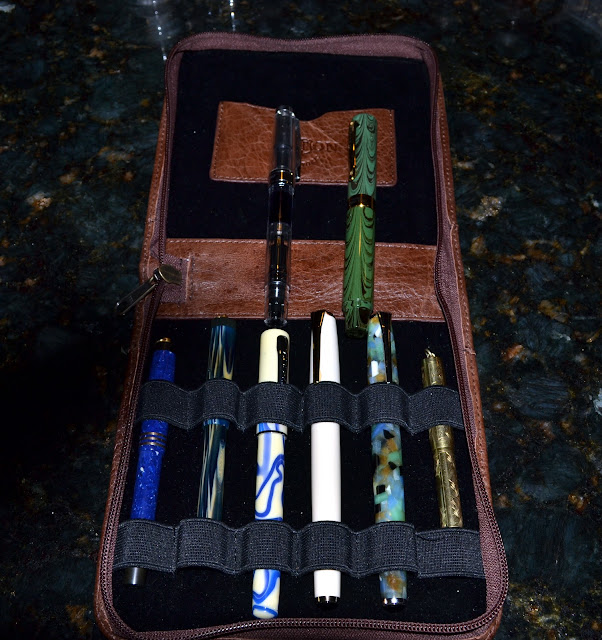 Email ThisBlogThis!Share to TwitterShare to FacebookShare to Pinterest
Labels: commentary